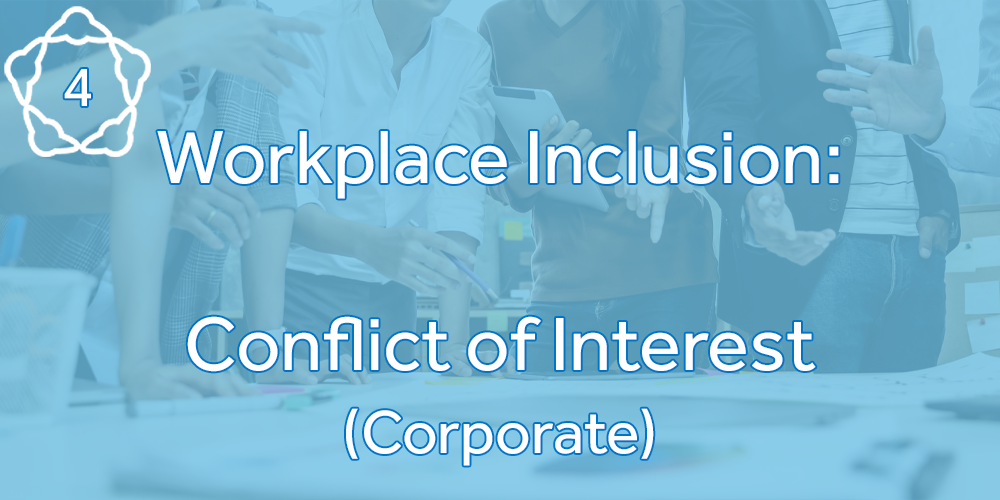 This is the fourth article in a six-part series of posts that explores this more:

The most fundamental and underlying issue is a conflict of interest. This insidiously undermines all other workforce diversity and workplace inclusion issues.

To make it worse, that conflict of interest is known and not acknowledged or addressed by most working in this field.

That conflict of interest applies to all of these stakeholders and can be explored in two broad categories – those driven by the corporate machinery, and those driven by personal factors.

The primary corporate conflicts of interest are:

Individuals at all levels in the company are employees. All bound by obligations to “not bring the company into disrepute”.

This is often explicitly stated in contracts of employment, else it’s implicit. Importantly those conditions are often interpreted to apply to conduct outside or away from work as well as inside.

The employee is conflicted. Employees at all levels are prevented from saying anything negative that could affect the company’s reputation. For example, about how inclusive the workplace culture may be, or its levels of workforce diversity – as it could put their career in jeopardy.

Most contracts of employment include confidentiality clauses. Confidential information cannot be shared outside of the company and rightly so, for most situations. Most companies however categorise negative information as confidential.

The employee is conflicted. Employees of all levels are prevented from sharing anything that is considered confidential. For example, pay disparities or unequal representation of minority groups.

Marketing departments realise that equity and inclusion initiatives can generate good messaging. That applies to business-to-business and business-to-consumer customers. At the same time, executives and Human Resources departments are keen to portray the company positively to be attractive as employers.

This leads to executives looking for good news stories, participating in awards processes to generate good PR, and “virtue signalling” to send the right messages.  The real changes that are needed are likely to be far less glamorous – so don’t get done.

Marketing, HR and executive leadership are all conflicted. As programs that generate good messaging and “PR” are the only ones that are listened to, they become the external message – which may be markedly different from reality in the company.