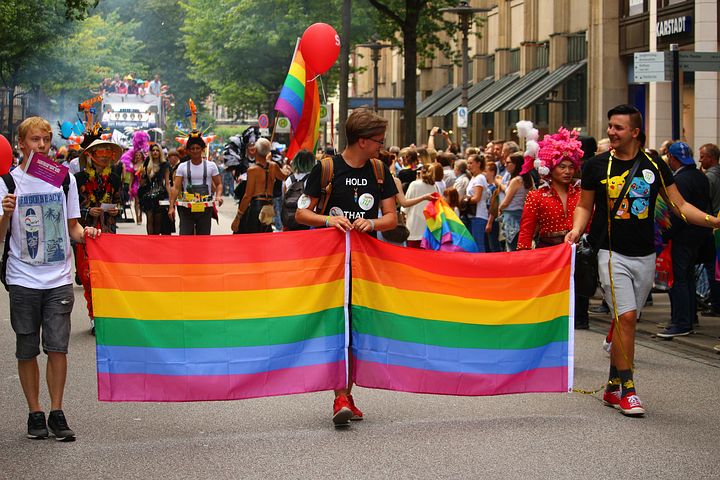 “Pride season” is the time of year when many cities (notably in the Northern Hemisphere) hold their Pride events. These will range from a parade, through to week-long (or even longer) celebrations that incorporate artistic events, business related conferences and a variety of other awareness raising events.

If you have an opportunity to watch a Pride parade, or even participate in one, I’d really encourage you to do so. I can guarantee you that it’s an experience you won’t forget! It’s difficult to describe the electric feeling of walking along the main streets of cities which have been closed to traffic amongst a cacophony of sound, with thousands upon thousands of people cheering you along from the sides! Through this blog I’d like to encourage you to participate, and if you have the opportunity to join a Pride to do so.

The parade of course has its roots in protest marches. For many years LGBT+ people have been overtly ostracised and excluded by society and pride marches have been an opportunity to protest and give voice to that community. In some countries it remains the case that the pride parade remains predominantly a protest at the massive injustices that continue to exist against LGBT+ people.

Nowadays the intent behind prides is many-fold. Typically it’s a combination of highlighting where injustices and inequality of treatment of LGBT+ people continues to exist, an opportunity to say thank you to those who have previously achieved positive change, and of course where true an opportunity to celebrate increasing acceptance of LGBT+ people in society and at work.

The most visible events are the Pride Parade. Typically through a city centre these will have an eclectic mix of floats along with people simply marching with banners, representing groups from youth-based and national charities, a wide-array of social groups for LGBT+ people (e.g. sports teams and choirs), political parties, to businesses that are proud to show their support and acceptance of LGBT+ people. There will be an eye-opening range of outfits and messages to take on board too!

I’ve watched many Pride marches over the years in many countries, and I’ve also had the privilege to be able to march in Pride in London and Manchester with colleagues from my company, in Toronto with Air Canada, and even in Jerusalem with the US Embassy/Mission.

The one in Jerusalem was quite surreal in many ways. Due to security concerns (a young girl had been stabbed and killed the year before) there were no crowds allowed to watch the parade, there were over 2000 police and armed forces guarding the march, and the roads were closed one block back on either side of the route. It was a very interesting experience.

There’s a serious side to Pride which is why I’m a great fan of them:

There are always families with children in the crowds watching – Pride Parades provide a wonderful opportunity for children of all ages to see LGBT+ people and where appropriate have conversations about what it means to be LGBT+.

So, back to the beginning, if you have the chance to participate in a pride parade I’d really encourage you to do so. Use Google to search for your nearest Pride!

On the gender pay gap.